Something to Hide: Emerson Electric Claims Nearly 16,000 Pages of Investigation-Related Documents Are Secret

Emerson Electric (EMR) was involved in a sizable - and undisclosed - SEC investigation in 2013 which it really doesn't want you to know about.  Of course, the mere existence of an SEC investigation should not be construed as an indication that any violations of law have occurred with respect to any person, entity, or security.  Having said that, it's our assessment Emerson does appear as a company with something to hide.  For many investors, this will rightly be of concern.

Let us begin by observing that Emerson Electric made no clear disclosures of SEC investigative activity at any time in the past five years.  But we now know that Emerson was involved in an SEC investigation in 2013 of such scale that it generated, “approximately 23 boxes of records”, or an estimated 69,000 pages (see excerpt from SEC letter below).

In the balance of this report we explain why we think Emerson's claims of confidentiality are likely more specious than substantive.  We start with a brief historical context to explain what maneuvers Emerson is likely employing and then walk you through where those same maneuvers fail in comparison to confidentiality claims that we typically see.  This report ends with a summary of FOIA findings on Emerson drawn from the Probes Reporter database. 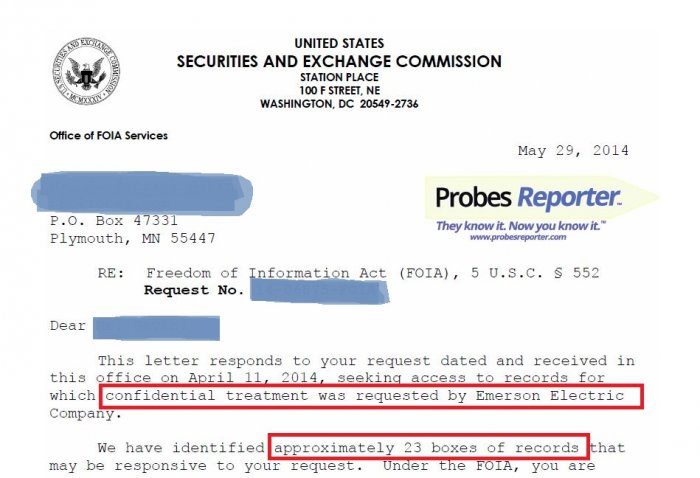 In 2000 Probes Reporter’s founder, John P. Gavin, CFA pioneered the systematic use of the FOIA with the SEC as a research and investor advocacy tool.  The company he started back then, SEC Insight, quickly became known for the airing of public company “dirty laundry”.  This did not go unnoticed by Wall Street or the legal community.

In response, counsel for public companies began to educate their clients on how to block SEC Insight and others that followed.  In an article posted to the American Bar Association’s website, Mr. Gavin was twice referenced in a piece on, "... how best to protect documents from unnecessary release to the public." (See "The FOIA Blitzkrieg: Company documents provided to the SEC are under attack").

Consistent with tactics advocated in the above-referenced article, Emerson Electric asserted the SEC’s “Rule 83” to block access to records it doesn't want you to see.  The SEC’s Rule 83 allows companies to initially get away with making what are essentially unlimited confidentiality claims without substantiation.  The Rule states, in part, that:

“The requester [Emerson] may claim personal or business confidentiality, but need not substantiate his or her request until the FOIA Office notifies him of a FOIA request for the records.”

In other words, a company wishing to hide details on an SEC investigation may simply claim that something is confidential, and is only required to substantiate the need for secrecy after the documents have been requested through a FOIA request, as was done by us.

When a public company uses Rule 83 to make sweeping, yet unsubstantiated, confidentiality claims we say they are playing the Confidentiality Game.

We know from experience that legitimate claims of confidentiality tend to be specific and limited in scope.  On this basis alone, it strains credibility to believe every single one of those 15,910 pages of records claimed as “confidential” by Emerson really is.

For example, Apple might legitimately seek confidential protection so that the details of its contract with AT&T did not become known to the world.   The Freedom of Information Act (FOIA) generally views the hypothetical Apple-type of request for confidentiality as reasonable; we’ve seen others make requests like this; they typically result in an order granting confidential protection; and, challenging such orders is rarely successful.  This is also the case with trade secrets and sensitive personal information about employees.

The Dirty Secret to the Confidentiality Game

Any investor has the right to challenge an overbroad or unsubstantiated Rule 83 request for secrecy. If challenged, the public company knows the SEC will likely release most of those same records anyway. That's because the standards for substantiating a confidentiality claim, once challenged, are actually quite high.

But public companies also know that mounting a challenge can be expensive and, more importantly to investors, can easily take up to two years – or even longer. We call this the dirty secret to the confidentiality game.

In short, public companies playing the confidentiality game count on the fact most people don't even know they can challenge a confidentiality claim, will find it too daunting to start, or they simply give up.  Probes Reporter is not one of them.

We are firm in our conviction that investors are generally best protected if SEC investigations are disclosed and overbroad and sweeping claims of confidentiality, whether made by the SEC or those it allegedly regulates, are properly challenged.  As such, we already filed a challenge with the SEC.

Emerson must now prove the documents it claims as confidential really are.  Given the sheer volume of records this company claimed as confidential, it will also likely cost it untold thousands to do so.  Some may say these are expenses this company could, and should, have avoided by being more transparent in the first place.  We concur.

Our FOIA History Regarding Emerson Electric

Worth Noting:  Emerson made no clear disclosures of SEC investigative activity at any time in the past five years.

Note:   New investigative activity could theoretically begin or end after the date covered by this latest information which would not be reflected here.

To learn more on our process and what our findings mean, click here.

Enjoy this Article? Get Alerts & Analysis of Both Undisclosed and Disclosed SEC Probes

Become a Subscriber » Sign In »
Thanks for signing up! You will now receive email alerts as we publish, and you may opt-out at any time.

Who We Are • How We Help You • Deliverables